Every organization has an origin story. Usually that story incorporates a history lesson about a founder putting down roots, establishing its headquarters, and growing an enterprise that becomes a point of pride for the city in which it was founded. Think of highly recognizable brands – Microsoft, Apple, Target, Kellogg’s, Ford Motor Company, and Walmart to name a few – and there’s a good chance you know their origin. But being rooted in place doesn’t hold the same significance it once did.

Historically, to grow operations – and evolve the brand story and its depth – has involved launching satellite offices in strategic locations to reach untapped markets. This could take years to accomplish and significant amounts of capital. Beyond historic and communal ties, where companies are rooted has become less relevant versus where and how companies choose to operate.

To answer questions about “where” and “how” today, many evolving businesses have recognized their competitive advantage includes looking to the cloud for their tech workloads and designing and building applications in a cloud-native manner.

The benefit of cloud and cloud-native applications as it relates to growth presents a fundamental narrative twist:  businesses don’t have to uproot themselves or expand their geographical footprint to get into the cloud. They remain physically rooted where they are while also becoming significantly more agile in the cloud. It’s not an either/or proposition, it’s a both/and action – and one that can happen fast.

What is then necessary to understand is how to think about and maximize your technical footprint in the cloud going forward.

The cloud is a bold, new frontier for industries and companies to build solutions and maximize business efficiencies. However, one of the biggest challenges is for companies to actually see it that way.

The cloud can be synonymous with an off-site storage unit: businesses put their documents in the cloud, and they “back it up” in the cloud for safe keeping rather than understanding its smart utility. For many businesses, the cloud has been reduced to a files repository rather than being viewed as robust extension of business operations and innovation. For sake of comparison, it would like buying an Apple Watch solely to tell time, and missing out on all the features and applications it was designed to run.

Practically speaking, what the cloud is for business is what Starbucks’ “third space concept” was for people (a third space to go other than work or home). The cloud extends and complements a headquarters and satellite offices – offering infinite opportunities for increased productivity, automation, cost savings, and re-use.

But simply setting up shop in the cloud isn’t the answer. You need the right applications that are built, architected, and operated to leverage the benefits of the cloud environment, which differ from how they would be constructed in a historical on-premises datacenter environment.

Cloud-native doesn’t mean taking existing workloads already running in a data center and transferring them to a cloud provider. It’s also vastly more than a virtual back-up plan. To maximize the cloud, and to be cloud-native, requires tapping into cloud services in an intentional and strategic way.

Here are six hallmarks of how cloud-native applications can strategically accelerate business performance and growth:

1. Scale that is infinite and effortless: In the cloud, computing, networking and storage are essentially utilities, just like electricity and natural gas. Operating within the cloud, your business can scale globally in seconds without worrying about capacity.

2. Build on the shoulders of giants: By using managed services you can avoid reinventing what cloud providers already offer by tapping into tested and proven solutions. This saves significant time, effort, and resources, and optimizes your total cost of ownership over time.

3. Reuse and distributed as the norm: Think of your applications as a distributed group of reusable components that are chained together, versus a single monolith where all parts are tightly coupled. A plug-and-play approach helps to accelerate your business in a flexibility way.

5. Realize a value-based cost model: In the cloud you pay only for what you use and avoid heavy upfront investments as there are no new data servers to build. Also consider longer-term commitments and reservations where you’re certain to bring larger savings.

6. Secure by design: Take advantage of the latest cloud best practices to secure and protect your data. Deploy detection and alerting best practices for awareness if compromises occur.

By reframing your thinking about the cloud, you can begin to see it as the next productivity hub and business accelerator. By leveraging cloud-native applications, you also realize the full benefit of this next business space.

To bring this full circle, consider where you’re rooted and what, if any, competitive advantages it affords. Is your brand story only rooted by an origin story and what you offer, or does it involve a forward-facing narrative? Businesses that rethink and refine their response to where they operate and how will make it easier for customers, clients and also talent to see the benefits and advantages of choosing them.

Whether you’re interested in discussing how to re-architect your workload as cloud-native, or start fresh in the cloud or IoT space, we can help you get there so you can write the next chapter of your story on transformative business growth and acceleration. 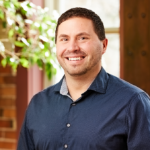 Ben blends his time between supporting current and prospective customers with their cloud needs, while leading, developing, and growing the team and their capabilities.